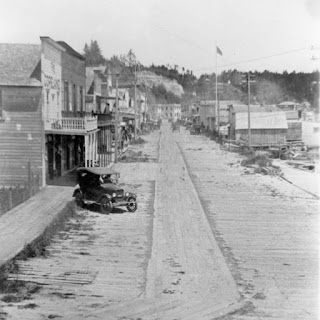 I love history for a lot of reasons. Understanding yesterday can help explain today. One of my favorite stories of local history does a lot to explain the proud, independent spirit of Lincoln County.

Until 1893, what we now know as Lincoln County was the western half of Benton County. This area had been home to First Peoples for thousands of years, but most of it had been opened to white settlement only a few years before. The people who came here were willing to endure isolation and hardships to build better lives for themselves and create communities.

One day, a delegation from Newport went to the County Courthouse in Corvallis to ask for some road building supplies. They didn’t want the labor—they were willing to supply that themselves—just the materials.

“Some old railroad ties will be good enough for you clam diggers on Yaquina Bay,” was the answer.

That was enough to get the local folks good and mad. They petitioned Ben Jones, state senator who called Toledo home, to sponsor a bill to carve out what was originally to be know as Bay County. The bill was approved by the 1893 Legislature, signed by the governor, and we’ve been charting our own destiny ever since.

Ben Jones pops up in our history again. In 1919, he was one of the key members of the Legislature who passed a bill creating what was then known as the Roosevelt Military Highway and was later renamed U.S. Highway 101. Although it took almost twenty years to complete, that spelled the beginning of the end of isolation for our region.