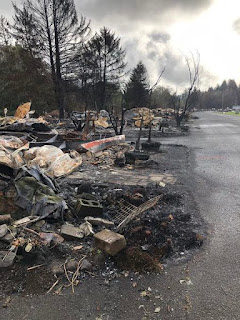 As I write these words, it’s been less than a month since the Echo Mountain fires erupted and changed hundreds of lives forever. We can offer thanks and celebrate the fact that no one was killed, but 2,500 acres burned and almost 300 homes were destroyed. Four weeks later, the fire’s out, but the cleanup and recovery process is just beginning.

On Monday, Sept. 7 (Labor Day) we were told that the fires at Echo Mountain and Kimberling Mountain were not controlled, but crews expected to be able to hold the perimeter overnight and begin working on containment at first light. Mother Nature had other plans. Driven by continued dry conditions and strong east winds, the fires exploded overnight.

A 5 a.m. phone call brought this alarming news to me, and I was in the Courthouse about 20 minutes later. It quickly became clear that we needed to declare a state of emergency, which allows us to move things faster than in normal conditions and potentially allows us to access state and federal resources. We held an emergency meeting to do that at 7:30 a.m. Some local jurisdictions didn’t do that until hours or even days later.

I immediately began taking part in what have been daily (sometimes constant) reports on the progress of the fire, efforts to contain it, evacuation of residents, communication with our partners and the public and emergency relief efforts, and helped set direction and priorities for these efforts.

I also put on my old reporter’s hat (I worked for local newspapers and radio stations for 18 years before being elected to this job) and went into the field to gather what has become dozens of interviews with helping organizations, police and firefighters, impacted businesses and more. I knew I had a strong Facebook platform and decided to share these videos along with the most timely, relevant and trustworthy information I could find, and the results have been astonishing.

Some of these videos have had thousands of views. People have thanked me for keeping them informed and helping to keep the community knitted together. I’m just grateful to have an opportunity to be part of the large web who have been, and will see us through.

I monitor the voice of the people in many ways—working in our county call center, holding down a table at the Multi-Agency Resource Center, phone calls, emails and monitoring social media. I am hearing a lot of voices about what went wrong, what went right, and what can be done to make things better.

Now as we shift into recovery mode, my focus changes. Disaster management experts say to look at this as a two-year process, at minimum. There are many immediate needs—

-- Cleanup of toxic fire waste to protect the environment and help clear the path for rebuilding.

-- Helping to make sure that homes that have survived but have damaged infrastructure like water and sewage disposal can have those services restored as quickly as possible.

-- Keeping a roof over people’s heads. The Red Cross had led the emergency housing phase, and still has several hundred people in Lincoln City motels. We still don’t have a firm date from RC on when that money will run out, and we, other communities and the state are pushing to get the voucher program extended as long as we can. We’re trying to find some other immediate solutions, but also looking at next steps.

-- Emergency housing assistance through FEMA, which includes manufactured housing, would be the most logical step. Oregon needs to jump through some more hoops to make that happen, but I’m being told it is likely. I’m also part of a group advocating for a concept called Project Turnkey, which would allow purchase of motels for immediate conversion to relief housing. We hope to access $20 million in emergency funds for this, which potentially could create 1,000 units statewide within weeks.

-- I feel fortunate that my 15-plus years in housing policy and development at the local and state levels puts me in an excellent position to advocate for us. I’ve been a member of the state housing council for more than two years and have been chair of the council since the beginning of this year. I know non-profit and private developers, people in social services, the world of finance, and others who control the levers in this realm.

-- We will do a thorough after-action review to sort out what went wrong and what went right. One thing I want everyone to understand: Disaster response is everyone’s business—the individual, cities, counties, the state and federal governments. We all hope there won’t be a next time, but we have to be prepared for if (when) it happens.

-- I have seen many heart-wrenching stories of tragedy from the fire. No one died, but so many lives were thrown into complete chaos within hours. Losing your home doesn’t just mean losing the place where you eat and sleep. It means loss of your place of stability, your place of refuge, the place that’s the repository of a lifetime of memories and treasures.

-- As I try to reflect on the upside of such tremendous loss, I have to zero in on the generosity and resilience of the human spirt that the people, especially those of North Lincoln County, have displayed. We’re a proud, sometimes stubborn, and independent group of people who call this paradise on earth home. But when our neighbors are in need, we rise up to extend the hand of support and help
Labels: About Me Career Results Caring Solves Problems Communication Echo Mountain Fire Future Homelessness Homeownership Housing Job of a Commissioner Problem Solving